The ongoing debate about the pros and cons of home and hybrid working has hit the headlines in recent weeks, with some UK politicians suggesting civil servants need to return to the workplace to boost efficiency. Civil service unions have pushed back strongly against this, saying that what matters is what is delivered, not where people are working.

Hybrid working - and how it’s viewed - is still not uniform within government departments in the UK. A new CIPD survey of 1,000 UK employers shows it’s not just in Whitehall that attitudes vary over whether changes to working practices caused by the pandemic will stick or not.

The survey data suggests that, on the issue of whether employers trust people working from home to be productive, the experience of working through the pandemic has led to a shift in attitudes: Six in ten (59%) respondents agree or strongly agree that business leaders are more likely to trust people to work from home and be productive following the pandemic, with just 14% disagreeing. This chimes with previous CIPD survey data, which found that a growing proportion of employers agreed that the shift to more homeworking during the pandemic had increased productivity rather than decreased it. 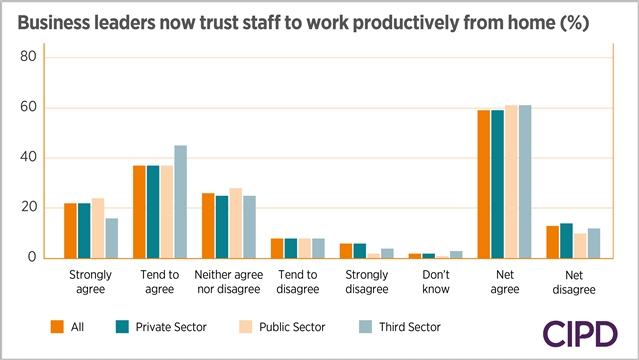 Against the context of these broadly positive employer attitudes towards the effectiveness of hybrid working, it’s not surprising that more than three-quarters (77%) of our survey sample reported that their organisation allows hybrid working.

However, there are significant differences in approach. Senior decision-makers are most likely to indicate that their organisation allows hybrid working and has a formal policy in place, with around a third saying so (34%). 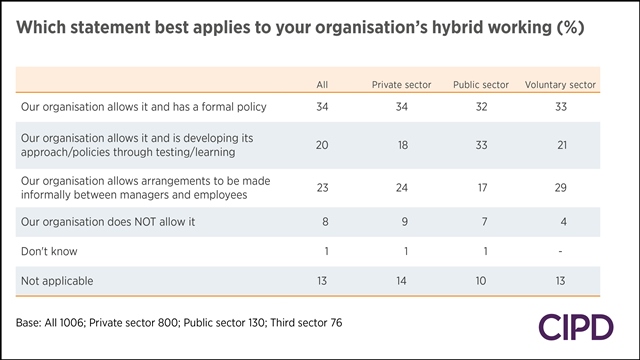 A key issue for policies on hybrid working is whether workers are set a minimum number of days to be in the office. On this issue, our survey shows a range of approaches: 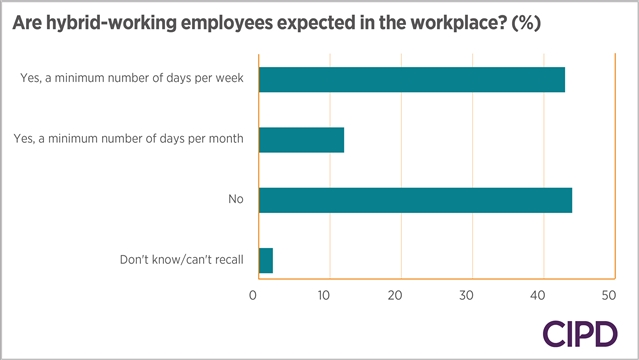 Minimum number of days per week

Among employers that set a minimum number of days per week to be in the workplace, organisations are most likely to require employees to be there two (34%) or three (32%) days per week. In all, 10% of respondents say they expect workers to be in one day a week, while the same proportion report four days per week. 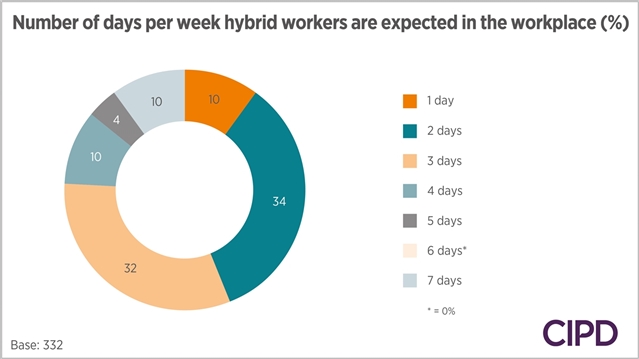 Hybrid working and pay and benefits

A potentially divisive issue for the future of hybrid working is whether those who have to attend the workplace should attract a pay premium to compensate for additional commuting costs. The CIPD believes there are significant inclusion and equality risks associated with differentiating pay for hybrid and office-based staff:

It seems that the majority of employers recognise these downsides since most organisations (68%) have not reduced pay or benefits for employees who are predominately working from home – and do not plan to do so in the future.

Just 4% of organisations have reduced pay or benefits for employees who are predominantly working from home, although this practice is slightly more common in the public sector (7%).

However, 13% of respondents said their organisation was planning to do this, rising to 15% in the public sector.

At the other end of the spectrum, around 1 in 10 organisations have not reduced pay or benefits, and have actually contributed to cover the costs faced by employees who are mostly working from home. This is more likely to happen in the voluntary (17%) sector than in the private (12%) and public (6%) sectors. 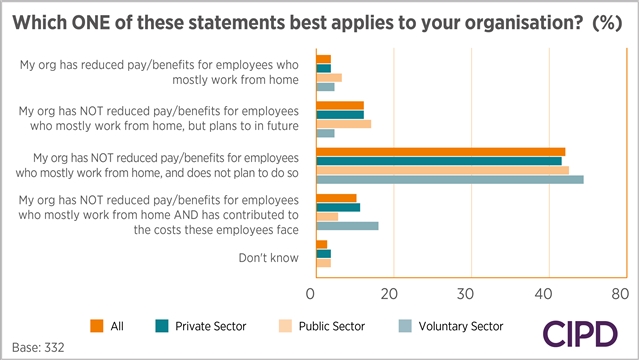 Looking ahead, our survey suggests that the jury is still out on whether the pandemic will permanently change working practices in the UK over the longer term. Employers were split down the middle when asked to agree or disagree with the statement that ‘the memory of the pandemic will fade quickly and it won’t be long before we revert to the way we worked before COVID-19’.

In all, 42% of respondents thought the memory of the pandemic will fade quickly (compared to 41% who disagreed), while 16% neither agreed nor disagreed and 2% said they didn’t know. Private-sector employers are most likely to agree (43%), while those in the public sector are least likely to agree (35%).

The survey shows that respondents whose organisations have a formal policy on hybrid working are most likely to disagree (51%) than agree (34%) with the statement.

In contrast, among employers who are testing and learning to inform their approach to hybrid working, 41% agree that they’ll soon revert to the way we used to work, as do 46% of organisations that have informal agreements on hybrid working. Perhaps unsurprisingly, employers that don’t allow hybrid working are most likely to agree (57%) and least likely to disagree (27%) with the statement. 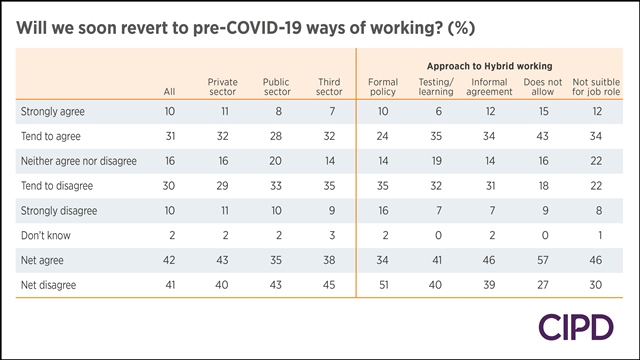 These findings suggest that employers who have formalised policies on hybrid working are more likely to believe there’ll be lasting changes to how people work post-pandemic. Formal policies can also ensure there’s a clear understanding among workers of the organisation’s approach and consistency in how hybrid working is managed.

There are clear benefits for both employers and employees when it comes to implementing well-managed hybrid working practices. However, there’s no one-size-fits-all approach, as the organisational and sector context will decide what best suits different businesses. Organisations that find the sweet spot (meeting employee and business needs) are likely to be those that find it easier to attract and retain a more diverse and motivated workforce. It would be a huge missed opportunity if the potential benefits from some of the lessons learned during the pandemic were not realised as we move forward.